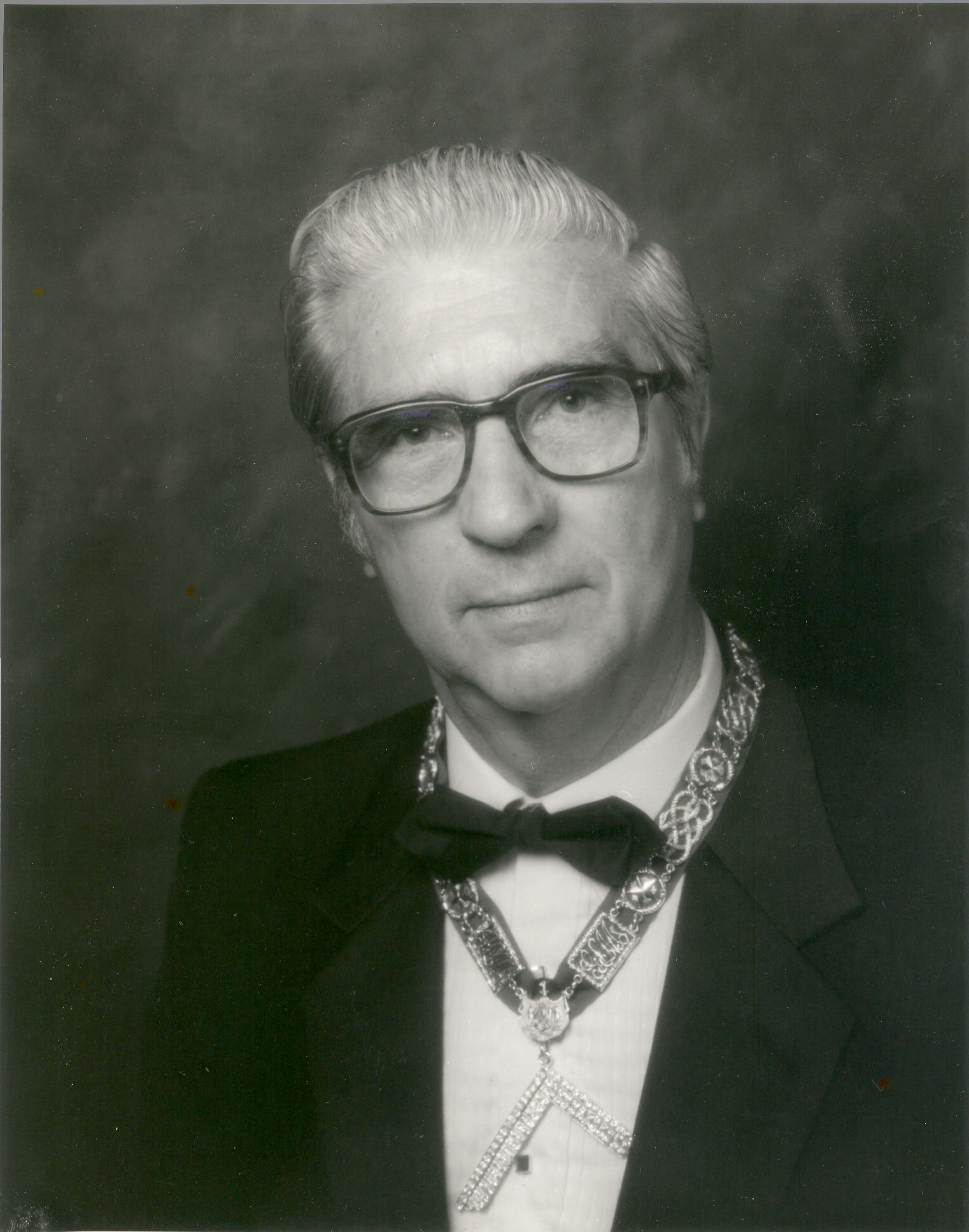 Born in Cordova, Talbot County, Bro. Harrison attended schools in Talbot, Caroline, and Dorchester Counties, graduating from Hurlock High School in Dorchester County in 1942. There he met his future wife, Willa Catherine Jaynes, with whom he enjoyed a happy marriage. They had one son, Jerry Hope Harrison – a member of Granite Lodge No. 177 – and two daughters, Mrs. Carol Sinclair of Trappe and Mrs. Anne Barker.
During World War II, Grand Master Harrison served in the U. S. Navy, graduating form the Submarine Training School in New London, Connecticut. He spent most of his naval service on a radar/sonar training ship stationed in New London. After being discharged from service in February of 1946, he and his wife moved to St. Michaels, Maryland.
After his discharged he spent forty years in the construction and real estate business. Being an operative mason, he started his own masonry contracting business at the age of 24. A few years later, he enlarged his business to include general construction of residential and light industrial projects and some development.
The long hours and pressures of running a business were such that he did not petition his home lodge, Granite Lodge No. 177 until he was 39. He had the unique pleasure of being Raised in Granite Lodge by Past Grand Master Edward R. Saunders. In 1971 and in 1978 he served as the Worshipful Master of the lodge. He was Worthy Patron of St. Michaels Chapter, O.E.S., for three terms and maintained active membership in both the York Rite and Scottish Rite Bodies. He first became active in the Grand Lodge under Past Grand Master Middleton, who appointed him W. Grand Standard Bearer in 1975. He was elected R. W. Senior Grand Warden in 1981 and later served as Right Worshipful Deputy Grand Master in 1987-88 before serving as Most Worshipful Grand Master in 1989-90. With vigor enthusiasm he led the Grand Lodge and promoted the efforts of the Solomon II and Dr. John Coats Memorial Lodge, No. 1787 programs as well as the work of Maryland Masonic Charities in child drug and alcohol prevention programs. Within Masonry he practiced the virtues of Brotherly Love, Relief and Truth.
In addition to his Masonic service, he was an ardent Christian serving in almost every capacity in the Methodist church from Sunday School Superintendent to Lay Leader. Active in his community, he served Talbot County and the town of St. Michaels on several boards and commissions.
Grand Master Harrison was raised on a farm and was an avid gardener. His ambition was to nourish, promote, and help our fraternity grow. He will be greatly missed by all those who knew him. Grand Master Harrison passed away, surrounded by his family on February 25, 2018.
﻿
Main Menu